Posted by Darren Leadsom on 27 February 2019

The Traveller’s Tales project began in 2016 with the aim of exploring Gypsy, Roma & Traveller culture. Initially, it was a project to collect stories – both old and new – through working with people from the GRT communities and schools in Lancaster, Morecambe, Preston and Accrington. Photos, short films, songs and stories were gathered and created through the summer and presented at Preston’s Lancashire Encounters Festival in September that year.

In 2018 with the support of Lancashire Music Hub again, we decided to continue the project with St Pat’s, a lovely primary school in Heysham with a high proportion of pupils from a GRT background. The staff are passionate about making the Traveller community feel welcome at the school.  They actively encourage music and the children’s enthusiasm for singing.

This term at St. Pat’s I worked with a Year 5 and a Year 6 class and spent an hour in each class for 12 weeks. During the first few weeks we discussed different cultures, traditions and heritage and what makes each one unique. Both classes were very lively and full of ideas. Lots of the Traveller children loved talking about their culture whereas others were reserved. When I explained that I was a Traveller and came from the same background as some of them, this led to lots of interesting discussions. This in turn brought up the topic of prejudices and questions like ‘Do you have to travel to be a Traveller?’, ‘Do you have to live in a caravan?’etc.

The children learned songs from various countries and cultures to encourage them to think about the differences and similarities. A favourite of theirs was an old Gypsy song called “Romany Rai” which we sang most lessons on their request. We also sang songs from Africa, China, Saudi Arabia, and Spain. After a healthy discussion about cultural similarities and differences, we wrote a chorus in each class:

– Year 5 – “We drive one way, they drive the other. We have siblings, some have to choose between a sister or brother. Some eat their food so quickly, some people act more strictly. Some make amazing cars, some make amazing chocolate bars”?

– Year 6 – “Different countries with people just the same, some of them even have the same name, different faces with smiles alike, we may not speak the language but if we try we might just get along”

Using this topic I assigned each table with a country and asked them to think about and discuss the history/aesthetic/laws/cultures/traditions/heritage of that country. They then individually wrote lyrics around this topic. Both classes decided they wanted a sung chorus, which we wrote chords/rhythm/melody for together and rapped verses. Most of the class took to lyric writing fondly and were coming up with creative ways to word their verses. In the end we had at least 4 lines from everyone in (and 32+ lines from some!)

Once everyone had perfected their own individual raps, we spent some weeks developing their performance of the rap and then recorded the songs. Many of the children took the recording process very seriously and listened back to improve their takes.  Others were shy but were eventually able to record their verses after some positive encouragement.

They were very proud when hearing themselves mixed into the finished track alongside everyone else and it felt like it brought a sense of unity to the class. Instead of teasing each other about how they sounded on the recording (as initially feared by one of the teachers) they were encouraging and gave compliments in their feedback to each other.

The last song we wrote together came from each pupil telling a story from his or her families history. This process, again, led to lots of discussions about how we think of certain types of people and how discrimination should be challenged.

Throughout the project I’d noticed a divide between certain cliques in the Traveller children and non-Traveller children so had attempted to close this divide by pairing them outside of their cliques for songwriting tasks. Seeing them be a little more tolerant of each other after discussions about their families and heritage was a joy.

Through songwriting we explored lots of challenging themes such as stereotypes, racism and discrimination. At the end of the project each member of both class received a CD with their recordings with their own individual lyrics and voice on which they were all very excited about.

Matthew Bellhouse, Year 5 teacher. St Patrick’s Catholic Primary School said: “Leroy worked with year 5 for a number of weeks and the children loved the experience. I was so impressed with how the song developed and improved each week. Leroy was great with the children and they really looked forward to him coming in each week. The final product was better than I could have ever imagined, it’s so catchy and sounds so professional! The CD for each of them to take home was a really nice touch. Thanks for all your efforts Leroy!” 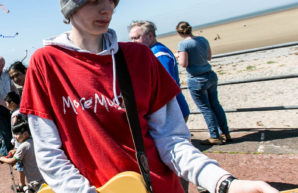