The Glass Is Half Full If You Want It

There seems to have been a positive rash of reports about young people and music making recently. Mostly bringing sobering reading and damning media headlines.

One of the latest was ‘The State of Play’ (we all like a good music related pun), a review of music education in England 2019, promoted by the Musicians’ Union. There is plenty in it that is familiar to anyone working in education or caring about the state of music for young people.

In particular cuts are having a real effect of worsening equality of access to music. There is a huge inequality in instrumental provision with children from families earning under £28,000 a year half as likely to learn an instrument as those with families with an income of over £48,000. 89% of parents are making a financial contribution towards instrumental lessons. This flies in the face of stated aims of arts and education policy.

While the government has made more supportive noises over the last months, other parts of educational changes are pulling in a different direction. 47.7% of respondents to the report’s survey said that the EBacc had had a completely negative impact on music, just 4.7% saw any kind of positive impact.

But as so often it was an individual story from this research that drew most attention on social media. One respondent quoted a letter written by a head to parents: “Music is a hobby, it is not a career. It will not be supported by the school.” Utterly depressing, but very telling. It is hard to know what to do with the idea that activities for young people are either ‘hobbies’ or ‘careers’.

Even so, it’s really important to emphasise two things. Firstly, much great work is going on in music education and here at More Music we’ve always had a focus on inclusive opportunities for young people. Secondly, young people’s musical lives are broader than education and the types of music making that tend to be seen as ‘worthy’ or ‘significant’.

Just over the last year here in Lancashire we’ve concentrated on boosting access to singing and vocal opportunities for young people and finding out about the work that is going on – this is through the Lancashire Music Hub. Engagement has risen to significantly more than the national average – that is young people sharing in the power of vocal music. We are opening this for example to include rap and beatboxing so every voice matters.

And it is that broader perspective where every voice matters that shows that maybe the glass is half full if we want it. Youth Music who we work with at More Music have had their own report – The Sound of The Next Generation. It looks at young people’s musical lives as a whole. Here the news is better – young people are making more music than they were a decade ago, 67% of young people make music. There’s much to give hope in very different ways, I particularly like the stat that 85% of young singers say singing makes them happy.

There are things that go against the idea that technology is a negative influence on young people, 19% of 16-17 year old young men make music on a computer – an extraordinary flowering of work by the “bedroom musicians”. Young people are seeking online tuition – it isn’t all about classroom settings.

Above all we need to see that young people, and their musical lives, thrive in communities. Parents, carers, siblings, sharing music online, rooms to do band practice, brass bands, clubbing – and so on and on and on, all have their place. And need support and recognition too. Not everything is either a career or a hobby. We need policy that recognises the full richness of young people’s musical lives. 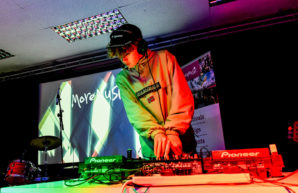