Stormzy In A Teacup

Given that most of the news at the moment switches between Br-x-t and the ongoing stream of consciousness that is Trump’s twitter feed, it was good to see music education get in the headlines. Not least as it was about a report from Youth Music, one of More Music’s major partners. “Stormzy should replace Mozart in UK classrooms, study says”, Sky News announced breathlessly.

Engaging as the image of the UK Grime sensation bursting in to an orchestra rehearsal and throwing aside the score to the Jupiter symphony is, what is actually being proposed by Youth Music is more nuanced.

The background is a major research project “Exchanging Notes”, exploring engaging young people focusing on their existing passion for music and individual needs. It brought together schools, music organisations like Brighter Sound, who More Music work closely with, and Birmingham City University. There was a particular aim to explore the benefits for young people at risk of school exclusion or low attainment. 10 partnerships were invested in and the whole programme lasted over 4 years- a really extensive piece of work.

In the introduction to the report Youth Music CEO Matt Griffiths set out a key observation: “Young people on our projects often contrast their Youth Music experience to the music they do in school. Primarily because in school they are given less autonomy over their own learning… It’s disconnected from their musical lives”. This is an experience we come across at More Music. It’s not about saying there is just one way to do things – it’s about recognising a variety of approaches are important if we are to include all young people in music making.

The results of the programme were striking. Young people at risk of exclusion at the outset of the programme maintained high levels of attendance. The programme helped some young people re-enter mainstream education after having been excluded. Two-thirds of the young musicians maintained or improved their attainment in English across the 4 years of Exchanging Notes programme. The social outcomes were particularly strong.

The point being, that giving young people agency works. We’ve seen this time and again at More Music, especially through the work of the young leaders. And the starting point is often coming from where young people are. It’s not about Stormzy v Mozart. It’s about young people themselves being in the centre, and trusting they can find both and everything in between and outside.

To me, the way the headlines played out exposed an attitude which is important to challenge. An implicit idea that popular, urban forms of music are less worthy of attention. That music education is about a particular type of attitude that takes working class and BAME youth less seriously. Even a whiff of the ‘culture wars’ that dog so much of political discussion right now.

If you give young people agency they can break down those barriers. They will show Grime has form, rigour, structure, intention, skill, craft – all you want for growth in musical education. They can also value classical music by knowing about black 18thcentury composer Chevailler de Saint-Georges as well as Mozart. It’s vital the government commits to the value of music for young people in the round.

But more than anything, the outcomes of Exchanging Notes show we should be more holistic for what success looks like in music education. We have plenty of evidence of the impact on wellbeing, self-efficacy and wider attainment for young people. Far from being the Cinderella subject, a new inclusive music pedagogy could be the beacon for how education could work in the 21st century. That should make the headlines indeed. 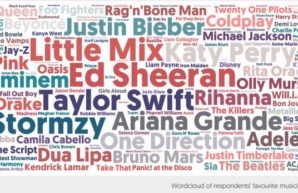