Romy reflects on her time at More Music

Romy visited us from Ireland on a two weeks work experience placement this May. Here’s what she had to say about her experience:

“The two weeks that I spent at More Music were undoubtedly one of the best experiences of my life, and I have experienced a lot throughout my 17 years on this planet. It was an eye opener, to say the least, and has completely changed the way I look at the world.

Before learning about More Music, I didn’t understand how education and social development and growth could be promoted through music, but coming out the other side, it couldn’t be more obvious. It’s a place where people can come to learn new skills, or practice those they already have. It’s a social space that provides them with the chance to come together and meet new people.

Going in, I had no idea what to expect; right from day dot, I was welcomed into a warm and friendly environment, surrounded by some incredibly kind and welcoming people, who were understanding, and patient with me as I adjusted to a new routine.

Every day was a new experience. I was interacting with a wide variety of different people, each with their own talents and their own stories; no two workshops were the same. The leaders running the workshops always made me feel included; I wasn’t just an outsider observing the works, I was involved with the activities, which was far more beneficial in my opinion. Some of my favourite workshops were Clapping Song, Baybeat Streetband and the LYVE choir. It never felt like work to me; I enjoyed everything I took part in, and was lucky enough to be working with some amazing and talented people.

There were so many amazing moments, so it’s hard to pick out just a few. The youth-focused workshops stood out to me especially, being a teenager myself. It was inspiring to see all these people my own age making music together. I was lucky enough to see the end of term gig, which completely blew me away; everyone was so talented, and so unique.

I also really enjoyed Highest Point Festival, which I went to on Sunday 19th of May. It was my first time going to Williamson Park, which was really beautiful. The whole day was just a buzz of music and colours. I played in Baybeat Streetband and the drumming circle, and also helped out with the ‘walking down the street’ Gamelan for the under fives. We were fortunate in that the weather held out, which resulted in a really lovely day out.

Another amazing experience was when Dobby, the Australian hip-hop artist visited us. He met with a group of us to explain what he did, and the importance of hip-hop as a culture, and its development in Australia. He performed at the end of term gig, and blew us all away with how talented he was.

It became very clear to me throughout the time that I spent there that More Music isn’t just about music; it is about bringing people together. It is a community, a family; a space where anyone can come to be around like-minded people, to create music, or just sit back and listen.  I feel very lucky to have been given the chance to experience all this, and look forward to going back as soon as possible.” 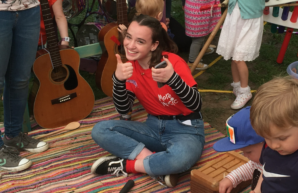