Early Years sessions are a focus for More Music and the last 12 months before lockdown may have been one of the busiest years yet. Early Years programme manager Ben McCabe and music leader Anni Tracy along with other More Music staff and collaborators have delivered a wide range of work locally and regionally, from interactive sessions to creative commissions to research projects. It’s good to take time to reflect upon this and have them share the great work they have been doing.

So, what has been happening over the last year? Clapping Song, our regular early years session, takes place in our building in Morecambe and at the Gregson Centre in Lancaster. It has developed through the gathering of knowledge and experience from a series of music leaders who have delivered the project over the years and also through sharing ideas at networks and training sessions. Sessions run weekly during term time, bringing in many local families to sing songs, action rhymes, finger rhymes and play fun musical games together with an increasing array of props from lycra to scarves, fans and bubbles.

Children take the lead in instrumental playing with leaders encouraging others to copy a particular child’s technique, by choosing songs from the song bag and in start/stop conducting games. The focus for Clapping Song as well as fun and meaningful music making is building the parent/child bond as well as supporting speech and language skills. Westgate Nursery in Morecambe asked Anni to run some sessions in their nursery which gives a different feel for the session as there are fewer adults present and children speak up a lot more, maybe empowered to do so by the fact that the sessions take place in their space.

At Clapping Song Anni provides a selection of instruments and other props and prompts to explore when groups arrive. Children choose and explore freely with their discoveries being built-on by carers and leader. This informal part of the session is fundamentally child-led allowing for confidence to build and for children to practice being in charge of their experiences. Importantly it also offers a chance for children to interact child to child with other families and groups. Children often arrive at sessions feeling shy, being quiet and then blossom into demonstrative explorers by the end of a session through supported play and celebration of discoveries.

The feedback from families has been great to read:

• “Been coming for many years, its brilliant to see the children’s confidence grow. Today, one of my four-year olds joined in for the first time – brilliant!”

• We love these sessions! Anni is fantastic. Our daughter has grown in confidence and it is a delight to see her enjoying music. We regularly sing and enjoy the songs at home. Thank you!”

• “Lovely session which introduced our daughter to new sounds and objects. Very calming and safe. The sessions encourage imagination, creativity and active listening.”

• “I really do believe that it increases their confidence, it is so lovely when they get brave enough to say their own names out loud at the beginning. And to watch then gain enough confidence to join in fully with the singing and playing of instruments.”

Since lockdown, Clapping Song has moved online via Zoom sessions to maintain connections with our existing participants while we can’t be together in person. We’ve also shared Clapping Song resources online, a collection of 28 songs to listen to and interact with at home. It’s been important to maintain that connection and provide some routine during these times.

• “Our daughter loves attended Clapping Song, so much so that when we listened to the Clapping Songs online during lockdown she was initially delighted but then halfway through ‘Fabulous Band’ she burst into tears saying ‘I just want to go to Clapping Song.’ She seems quite emotionally invested in the songs.”

This interactive show was first developed in 2017 with Charlotte Arculus from Magic Adventure and is a specially created environment where objects, instruments and playful interventions gently flow. The activities are immersive and interactive, blending singing, music, light, texture, colour and shadow to create a magical experience for very young children and their families. These amazing sessions encourage children to explore freely and according to their own needs. They are intensive in their creation (a big set-up) and worth every moment for the lovely discoveries and interactions that occur when children are let loose. They always take the session on a journey that we haven’t expected and lead us to new places, finding new games to play.

The show ran three times in 2019. At Lancaster Arts’ Noisy Studio in March, in Morecambe in May and in Lancaster in November.

The Noisy Studio version of the show was a chance to work in partnership with Lancaster Arts and two other Early Years artists – dancer Fabiola Santana and Jenny Reeves and visual artist David Hulston. Although we were presenting three separate interactive performances the project gave us the unusual and welcome opportunity to go deep into thinking about who the work was for and how it might be received and interacted with on different levels: children of different ages, their parents, grand parents or carers, the interaction in a group of attendees, the interaction between strangers. Harriet Hill-Payne and Alice Booth from Lancaster Arts guided the project and encouraged conversation and sharing between the artforms. A gentle, listening, open approach to making work for inter-generational audiences. They and the team at Lancaster Arts also assisted with the slightly ridiculous build of the show.

At More Music the early summer show was a new story, being an exploration under the sea. Varying the underlying story gives practitioners the opportunity to play with the format, create new musical and visual ideas and keeping the project developing in this our third year of building from the original Magic Adventure residency.

Alice Booth and Lancaster Arts also co-produced the Magic Islands in Space show that we presented at Light Up Lancaster in October. A major event in Lancaster where the city is transformed by light, music, film and dance installations and performances over two nights, which attracts thousands of people

We worked with light artist David Boultbee to create a walk-through installation for the under 5s, siblings and their carers that was accessible to all ages too. It was quite a challenge to take the storytelling of the regular interactive performances that take up to ten families on a 45 minute journey and hone it down into a piece that would be flowing and playful but not too playful as the Light up Lancaster operations team needed there to be as little log-jam as possible with audience members moving thorough.

The partnership with Lancaster Arts provided an excellent CPD opportunity for us and resulted in numerous methods and tools that will enrich future Magic Islands sessions. One important thing we will be taking forward is Lancaster Arts’ focus on a meaningful experiences for people of all ages in Early Years. The partnership with Lancaster Arts enabled us to bring develop new techniques with David Boultbee including multi-coloured, carefully positioned lights creating overlapping shadows and making a star harp constellation table from fishing wire, screws, Perspex and contact mics. Using contact mics and delay is a brand-new development for us in an EY setting and allows us to think about valuing and amplifying tiny sounds.

• “Magic Islands has been the best thing I have taken my son to. Creative, beautiful, exciting and interactive. I can’t wait to bring my new baby when she is old enough.”

• “We absolutely love magic island performances. It shows so many different ways how to make sounds. My boy is always curious and amazed with what’s going on all around him. And he is allowed to experiment. Big fans over here”

WALKING DOWN THE STREET GAMELAN

This is our early years gamelan designed for under 5s which was taken out for four events over the year. Two of the events were our own Morecambe community festivals, That Spring Thing in April and Catch the Wind Kite Festival in July. In June, we were commissioned by the Festival of Making in Blackburn to upgrade the gamelan and bring it to their event for two days. It also made an appearance at the Highest Point Festival in Lancaster in May as part of their family day, an event which attracted thousands of people. Using a mixture of found objects, specially designed structures for suspending accessible instruments the Walking Down the Street Gamelan creates an oasis of play where musical interactions with others abound.

All of this work strengthens learning from research shared in the Early Years arts and education community. We have observed the positive impacts of music on young children, how it builds confidence, helps with development of communication skills, social, musical skills and parent/child bond. We were able to contribute to a new research project over the summer term in 2019, commissioned by bridge organisation Curious Minds.

We took part in a SLICE (Specialist Leader in Cultural Education) action research project, working with three East Lancashire nursery schools to respond to the statement “What role could cultural organisations have in supporting schools to think differently about arts, creativity, and cultural education underpinning the relationships between wellbeing and literacy in the early years?”

In consultation with the nursery schools, we delivered a mix of delivery, CPD and mentoring with nursery school staff to share our inclusive approaches and to try and embed the skills with them, to give them the confidence to continue with interactions after the project’s conclusion. The subsequent evaluation report produced by Manchester Met University researchers pointed to several positive outcomes:

• “At multiple points in the project, and within each of the settings staff reported that the focus on musical practices was having a significant impact on the children with diagnosed and undiagnosed special educational needs.”

• For the children, musical activities were often empowering, allowing spaces for children’s contributions and suggestions to be valued. For example, children could introduce their own ideas to the ‘walking down the street song’ or engage in interactional sound-play with adults for a sustained period without pressure to engage with words. Craft (2002) explains the significance of adults in creating a playful environment, which supports children’s self- confidence and self-esteem. Through such playful experimentation children’s well-being is positively impacted and evidenced through the Leuven scales.

The lockdown has provided an opportunity to try new digital styles of delivery. The original plan for the summer had been to establish a residency for the Walking Down the Street gamelan outside in Regent Park, just a few streets away from More Music. We’re looking adjusting these sessions to have fewer physical structures and props so we don’t have to worry about infection through using equipment. We might hold full body action song sessions in the park that rely solely on people’s voices and bodies to take part. We’re also looking at preparing multi-sensory packs for people to enjoy at home. 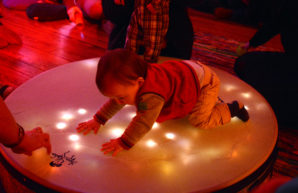