We woke around 8.30am and went for breakfast in a place we’d spotted last night – a shop with two sides… one called “Goose King’s Roasted Kitchen” and the other “Man Fat Seafood Restaurant”. We had the breakfast meal deal – noodle soup with Char Siu, Ham Omelette, bread & butter and a coffee.

Next we explored a few shops in the busy Mongkok area and visited a local fresh fish and live poultry street market where one of the chickens escaped and tried running away (we hoped it would make it.) We bought a few souvenirs and James bought some bananas.

Then we got on the bus and had a short journey to get to the Star Ferry harbour. We walked round the harbour past the space museum and admired the views of Hong Kong island before getting onto the Ferry across to the other side- it was only HK$ 2.80 or about 28 pence.

We then met Sue’s son Ryan who was on his lunch break at Pier 3 and he took us for coffee at “Uncle Russ” – his favourite coffee bar in the island; with a bun from a local bakers and we sat on the pier head and chatted admiring the views back to Kowloon where we’d just been sitting looking the other way 30 minutes earlier.

We needed some electronic gizmos so Ryan led us to MiniSo – a Japanese shop with cheap but high quality wares. It is really useful having someone who knows the local area to point you in the right direction! As we explored the shops on Hong Kong Island we noticed that everything was a lot more high brow – the shops were more shiny and expensive looking – and amongst the designer shops we even noticed a M&S and a Hallmark cards as we walked along to Central MTR underground train station.
Time was pressing on a bit and we needed to head back to get ready for our show so we hopped onto the MTR and were back in the vicinity of our hotel at Prince Edward MTR station with about 10 minutes! Amazing.. so much quicker than the bus and the ferry – although the view was not as good 😉

As we exited the station I remembered that “Harmony Music” store was was right at the top of one of the many entrances to the MTR and by magic guided us right there first time. We fell in love with virtually all of the Chinese Instruments in there and if we weren’t in such a rush I am sure we would have spent a lot of money – but we had to dash to get changed for our show.

The show was us plus two young local jazz musicians – Jacky and Harold. Jacky is the bandleader of “Only ones” Jazz who will be performing with us on Sunday at the more prestigious “LINK” show, Harold is a great young drummer.
The audience were about 50 – 60 local children and some of their parents from the local community which is one the poorest parts of the City.. that’s what Music for Children Foundation do.. they help young disadvantaged kids to make music and to enjoy it. These are totally different children from those that we met in Morecambe with Tutti Flutti who are from more well off families.

Surprisingly most of the children we met today from the local Mongkok area have never seen traditional Chinese instruments before! At the centre they learn to play violins, piano, flutes and so on. During the show Monique asks the audience if they know the name of the instrument s that we are playing – and not even any of the adults know what they are all called! It makes me realise that we must have developed quite a good knowledge of Chinese music and instruments.
The show was very interactive Monique asked the children lots of questions throughout. She did a talk at the beginning while we hid behind a curtain ready to appear on stage and she brought us out one at a time and introduced us as coming on a plane from a long way away!

We played 3 tunes: “Cloud Follow Moon”, “Flowers are pretty. Moon is round” and “Our Hero” then we went over to interact with the children and let them have a play on the instruments.

Then Jacky and Harold came and joined us on stage and we played some Jazz! – the well known standard “Autumn Leaves”. We had never played any jazz before on our Chinese instruments, but I managed to get a fairly decent baseline out with the Da Run, and James improvised some solos around the melody. I though it sounded great! It was especially fun when Harold and I traded 4s on Bass and Drums during the solos.

Then Long Walk sang one of the most well known Chinese songs “Molihua” in Mandarin. In Hong Kong people mostly speak Cantonese, although at school children usually learn Mandarin and English. The children were amazed that we could sing in Mandarin.

Then Monique impressed them by announcing that we could even sing also in Cantonese! And so we played our finale “Under Lion Rock” – with Monique accompanying us on piano, Jacky on Alto Sax and Harold on drums.
It was a lovely event and so great to see all the children enjoying themselves. Monique asked them lots of questions during the show and then at the end prizes were given out – and two children sang song to us in English and then were awarded cute teddies for their efforts! They got the words and the tune beautifully.

After the show we went out for supper at a vegetarian restaurant “Bodhisattva” just round the corner from our Hotel and had many “fake meat” dishes as well of some healthy platefuls of tasty steamed greens to revitalise ourselves.
We finished off the evening with a “Lemon Tea, biscuit and blogging” party in Kim and RIck’s spacious room and Phil kept us all entertained by continually pointing out just how bigger much this room is than his and James’ one. “look – there’s even enough space for someone to have a private phone conversation in the corner of this room.. you can barely stand up in ours.” Kim asked if James had his towels changed by room service and Phil said “Even your towels are so much bigger than ours!!” James countered.. “Hmmpf.. You couldn’t even get towels that large into our room!”

Then it was off to bed to try to sleep through the noise of the AC for an early start the next day. 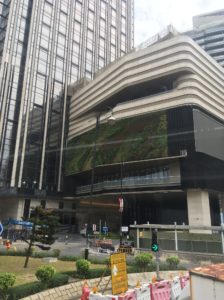 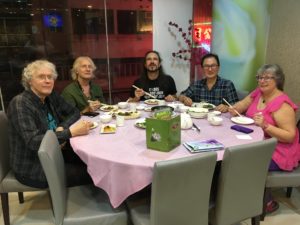 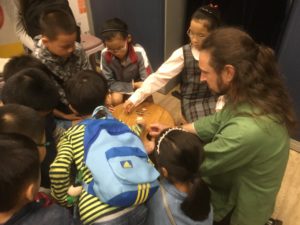 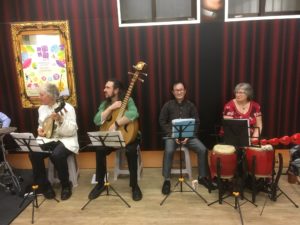 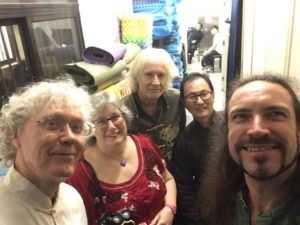 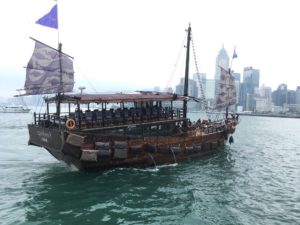 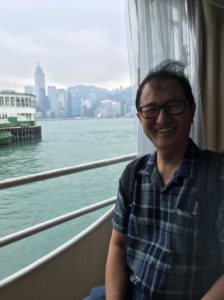 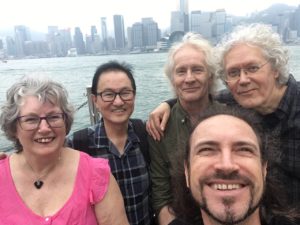 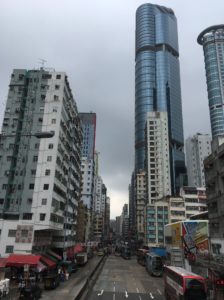 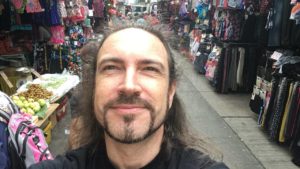 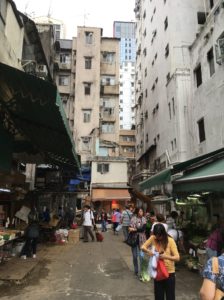 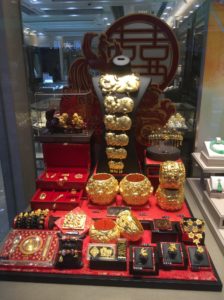 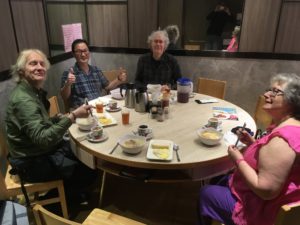 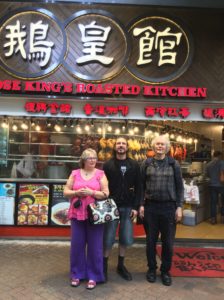 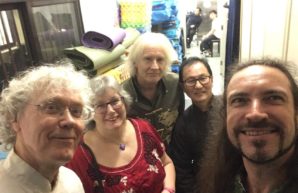