Historically, More Music has recognised the importance of working with young women. Projects like ‘Girls Allowed’ pre dating Girls Aloud the band and initiatives like ‘Girlschool’ – a regular girls only rock-school workshop within of our Stages project have all had the overarching aim of ensuring young women have equal access to a wide range of music making activities. Especially those stereotypically occupied by men.

As a result of this, the ratio of male to female participants at our band and urban music making sessions are pretty much a 50/50 split. I’m proud to say that we have developed a culture at More Music where it’s the norm for girls to be playing drums, guitar, writing songs, for boys to sing in choirs and for women to be running the studio or sound desk.

Over the past 2 years, the development of our Women in Music network has reinforced this on an organisational level and enabled us to meet, support and employ women, especially in areas of under representation. Through this we strive to provide more positive role models for the young people who attend sessions and projects. We also provide career development opportunities for those working working within the community music sector in the North West.

The concept of ‘Girls Can …’ however, came about a couple of years ago after I met Charlotte Barber through one of our first Women in Music network meetings, and also at around the same time that I had bought my daughter a sweatshirt with the slogan ‘Girls Can’!

As a drummer who has played in bands for over half my life, the under representation of women within the music industry has always been of interest for me. Be it the unconscious act of searching out bands that featured girls when I was a teenager or the now, very conscious, decision to seek advice from women who balance parenthood with a career in the industry. Though I have never felt like I couldn’t or shouldn’t be playing a certain instrument, there has been and continues to be judgements and barriers for women wishing to pursue careers in an industry predominantly occupied by men.

Whilst reflecting with the ‘Girls Can …’ team, I realised that never, in my 25 years of playing in a band, did I ever encounter a female sound engineer whilst touring and that all the albums I had recorded over the years had been engineered by men. Not to say there aren’t any women working as sound engineers or producers, but recent statistics show us that only 2% of producers are known to be working within the music industry are women. 2%!!!!!???

Hence, ‘Girls Can …’ came about to, on a local level, readdress the balance of women’s representation in the music industry, celebrate young women’s achievement and provide opportunities to explore areas of music and technology where barriers often exist for girls.

The 3 day residency took place at More Music during Feb half term 2019 and saw 9 young women come together from varied backgrounds. They brought a wide range of musical experiences and tastes and explored everything from composition to production, sound engineering to stage management in a safe and supportive environment. 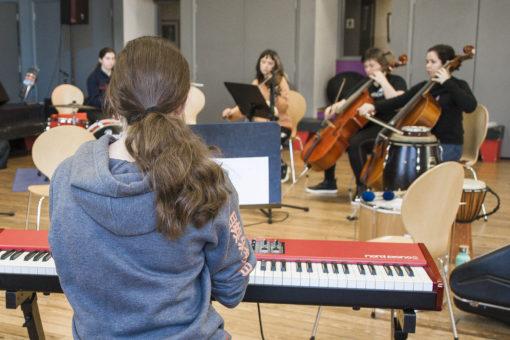 The group consisted of 2 cellists, a lighting and sound engineer, a guitarist, drummer and bassist, a pianist and 2 vocalists all with varied musical interests and levels of experience. Many of them didn’t know each other at the start of the project, but all were eager to gain new experiences, learn more about songwriting and composition and make a change!

Led by a team of inspirational women, all of whom work professionally within the music industry as musicians, sound techs, producers, composers, instrumentalists, educators and DJs, the week started with some ice breakers. This helped the group feel more comfortable and get to know each other. Following that they began to explore rhythm and group improvisation through stick work.

Next we headed to the tech room to explore music production using Logic. The group worked in pairs to create their own tracks using new skills they had developed through a workshop with Charlotte. Some of the group had produced music before at college or school but to others it was a completely new experience, however, everyone worked to support each other and results were fantastic! 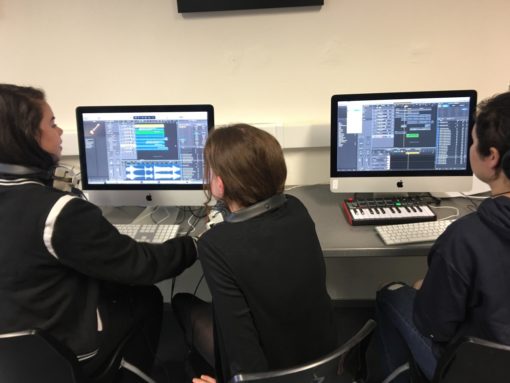 After lunch, we began the ambitious process of live composition and sound with Harriet and Amanda. The goal was to write a brand new piece of music to perform on Saturday evening as the opening support for Annie Whitehead and Rude 2.0.

Though nearly all the group had been involved in songwriting independently or within a band context, it was a challenge to create a piece of music together, in a bigger ensemble, that met everyones expectations. 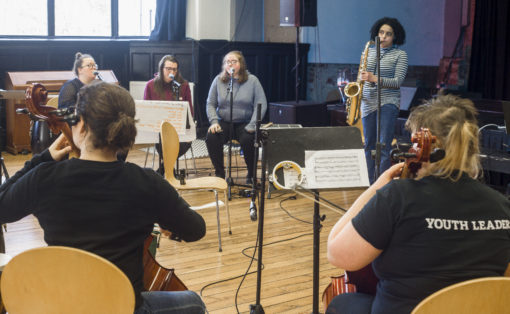 Following a quiz about some important female figures in history, Amanda introduced a new scale to use as a starting point for an afternoon of improvisation and composition. During this process, Harriet supported those of the group interested in developing their skills and experience in tech, sound and lights. They set up around the band, setting everything up, positioning lights and programming the lighting desk.

By the end of the first day, the group had a rough sketch of a song with lots of individual riff ideas and melody lines ready for day 2.

Day 2 started with a recap of the ideas developed during the first day as we listened back to the recording and shared arrangement ideas. Then after a quick warm up and primal scream led by Amanda, the group got back to work, arranging the ideas into an agreed structure while the vocalists developed lyric themes into a melody for the song. The pressure was on as jazz trombonist Annie Whitehead was joining the group for a coaching session in the afternoon, so we needed to have the basis of a song rehearsed up ready for her to listen to.

The group worked hard and by lunch we had the basic structure of our new song down and ready to perform to Annie as she began the process of breaking the song down to work on the finer details of parts, arrangement and performance.

Annie spent an intensive afternoon exploring individual parts and the way they fitted together collectively which was a new experience for the group. Through this they developed new skills in instrumental and ensemble arrangement. They also spent time exploring the finer details of songwriting and chord progressions in order to take their performance to the next level in terms of musicality. Annie worked with band on performance techniques, confidence and the delivery of a song, thinking about purpose and the message that was trying to be conveyed.

Day 2 ended with a final run through and recording of the track before it was time to go home and have a well deserved rest before gig day! 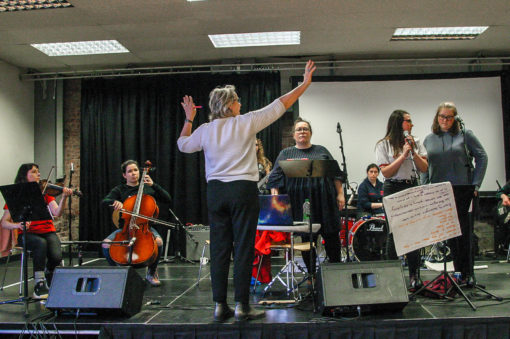 Day 3 started again with a listen through and sharing and thoughts about the song, plus the creation of a title for the song which, it was agreed, should be ‘Proud’.

The band spent the afternoon rehearsing the song on stage in preparation for the evening gig opening for Annie’s band Rude 2.0. Following the previous day’s masterclass they had clearly grown in confidence. The track was sounding great!

Whilst rehearsals were happening, Harriet and Hattie, who formed the tech team for the show, were working on mic placement, monitor mixes and lighting design as well as recording the rehearsals ready for the evening. 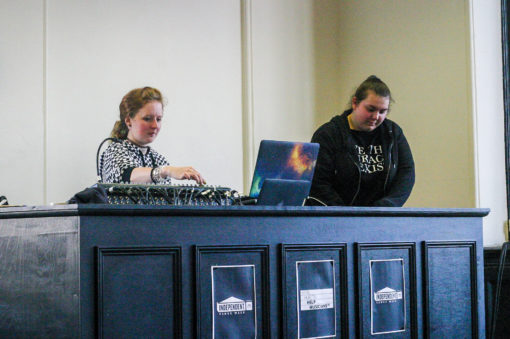 By 4pm the group were ready for the show and had chance to go and jam independently. What a great thing to witness as at the start of the project, people were sat on separate tables, now everyone was in a room together enjoying themselves and bonding over shared musical interests.

As the audience arrived, the ‘Girl’s Can …’ band gathered excitedly in the green room, tuning up and sharing nerves and performance tips. Finally it was time for the first ever performance of ‘Proud’ in front of a full house!

Before everyone left, we gathered some thoughts about the project from the young women who were involved and this is what they told us …

How have you found the experience and process of working collaboratively with new people?

-I have learnt about writing music and doing it collaboratively. I didn’t know about it before this so I can do more things like this in the future

-It was fun to work with people that I hadn’t met before. It makes you listen to the ensemble instead of just playing for yourself

What have you gained from Girls Can and how might you use it in the future?

-Experience and knowledge to write music

-I have learnt how to write a song, experience and made friends

-Experienced playing in a group

-I gained a better experience playing as a group and feel more confident playing quieter. I have also gained many, many friends who I really get along with.

-Not overpowered by boys/men

Would you recommend Girls Can to others and why?

-Yes, it is a really good way to learn about music and how to do it/write it. It is also a good experience

-Yes, because I gained lots of experience, made friends and had a really fun time

-Yes, because I made new friends and gained lots of experience

-YES! because it was awesome

-If i know anyone else who does music, yes

-Yes, because it’s empowering and inspiring as well as enjoyable 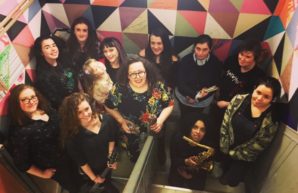