On the 26th March at 7pm The More Media Collective hosted a live streamed ‘Girls Can’ to celebrate women in music and showcase talent across Lancashire and the North West.

“There is no shortage of talented women in music. ‘Girls Can’ questions gender equality in the industry, particularly in light of recent reports that the programming of our major music festivals demonstrates a bias towards male artists and bands. Platforms like this gig are vital for both raising the visibility of talented artists and providing role models for young women who might be considering a future career in the industry.”

The gig showcased a diverse range of local musical talent, with pre-recorded sets from Iona Lane, Jyve, Dillettante and Varicose Veins, and live performances from Sarah Angel, Grace Monaco, Ellie Knowles and Hellen Kelly. The performances were not only mesmerising to watch, due to the talent of the artists, but they were also inspiring and showed that ‘girls can’, and should, have the same opportunities in the music industry.

The event was organised by the More Media Collective, who are a group of creative and talented young people who share a passion for music and are keen to develop skills in events management, marketing, and music technology. The group worked hard to organise the gig whilst only being able to meet once a week on Zoom.

On the night of the gig the More Media Collective worked on roles such as lighting, set design, interviewing, and hosting, whilst also being careful to ensure the environment was Covid safe. Despite the restrictions in place, the atmosphere was electric, and the audience watching the live stream on YouTube were impressed by the quality of the production and the calibre of the artists.

Prior to the performances, Brix, a member of the More Media Collective, interviewed some of the artists who all shared a positive outlook on their experiences during the last year:

“I would say lockdown was like really difficult, but also a blessing in disguise. It made me focus on things that I hadn’t, well not hadn’t, but like avoided […] because I really had the time to do it […] lockdown has really not been that bad apart from the fact I’ve not been able to do live gigs”

“It’s also given me a lot of time to reflect on my music, for myself, so I can actually definitively give myself a genre and identity in music now”

“I just tried jumping on different opportunities. I released an EP […] I ended up finding myself doing an internship at a local record label, Fear records […] Also, the label signed a development contract with me, So I’ve gone and recorded a few tracks”

In keeping with the ‘Girl Can’ theme the artists also reflected on their own experiences as women in the music industry and gave the following advice to other musicians:

“If you like a song, just sing it and really sing it from your heart, and don’t worry about what other people have to say about your music. At the end of the day, it’s your choice and your performance, and if you enjoy doing it then do it for yourself”

“feminine energy is so powerful and we can really fear it being like a young woman growing into a young adult, and yeah, don’t be scared of your yourself. I think we’re very fascinating beings’ women, so I think it can be very intimidating to ourselves. Don’t be intimidated by yourself. Let yourself, you know, run with your shines, sprinkle it on everyone.”

It was an honour for More Music to be able to showcase the talented musicians that were part of the ‘Girl Can’ gig, and the More Media Collective are looking forward to using their skills to organise more events in the future.

Keep your eye out for more ‘Girl Can’ events and opportunities coming up!

Re-watch the gig below 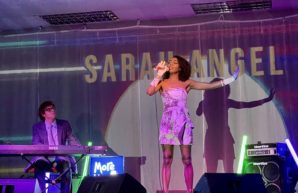