For the Encounter Festival LYVE were recruited to become part of a newly formed Lancashire Community Choir alongside singers from Blackburn, Skelmersdale and led by More Music’s new Artistic Director Loz Kaye.

Lauren Davies-Buckley is a year 13 student at Morecambe Community High School. She took part in both events. “Getting to work with Loz was incredible. Loz’s enthusiasm and passion for what he does makes being able to work with him such a pleasure.”

LYVE worked on a short cycle of songs inspired by the traditional song ‘Bread and Roses’ and performed with singers from wide range of backgrounds, ages and places. The same song cycle was then used as part of More Music’s ‘Turn the Big Light On’ installation for Light up Lancaster over the first weekend in November. Both performances were received by large appreciative audiences.

“It was great to be able to travel to Preston and perform these songs. It was hard singing with new people but we managed to achieve some really great harmonies” said Lauren.

Both gigs presented some challenges as they were outdoor; outside Preston’s Harris Museum and also in Lancaster’s Sun Square. Lauren said “Singing outside can be difficult, when it’s really cold and windy. Loz managed to keep all our spirits up when the rain was really coming down (a tough task when you forget to bring a coat!)”.

You can hear LYVE at Manchester Piccadilly Station as part of the 10 Station 100 Choirs event on Dec 2nd and at More Music in Morecambe on Dec 7th as part of the Stages Live gig. 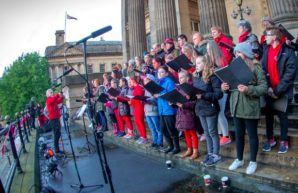