Marketing Intern Ella’s reflections on her internship at More Music:

I’ll admit that when I started working at More Music four months ago, I didn’t know much about the organisation or even Morecambe itself. Despite living in Lancaster for three out of the last four years, I had never taken the time to venture beyond a few walks on the prom or bike rides along the cycle path connecting our two towns. Yet, I instantly had a good feeling when I saw the advert for an internship that would not only give me experience in an area I wanted to explore, but which was in a company all about a big passion of mine: music.

As clichéd as it may sound, I could see what can only be described as the family-feel of More Music from the very first meeting I attended (and that was across Zoom!). It was clear that the staff working here see their roles as more than just jobs or a means of getting a paycheck – they are here because they love what they do and want to maintain the positive impact they have on the local community and beyond.

The positive impact that More Music has on its participants was never clearer than when groups were able to start meeting back in person. The first two months of my internship were almost exclusively online but little by little, we were able to start working at the More Music building in Morecambe West End and with that, I got to see the pure joy in groups such as On The Beat, an interactive music class for adults with learning disabilities, as they returned for their first in-person sessions.

As a Social Media and Marketing intern, I worked for the most part with Sandra and Kelly, two cogs without which More Music would simply cease to function. My tasks week-to-week were very varied, from creating content for social media channels, to writing press releases, to helping rebrand one of More Music’s groups or developing the team’s tactical plan. I enjoyed the varied nature of my internship and also working with the other intern, Kate, and Executive Director, Kathryn, alongside Sandra and Kelly. We really felt like a team!

Some particular highlights of my internship were doing live social media from the More Media Collective’s Girls Can livestream gig in March (which was the first time I had personally watched live music in person since the start of the pandemic!), helping to create marketing material and press releases for the return of live performances at More Music, and working at the Catch the Wind Community Picnics, which were organised by Kate as a replacement for the usual Catch the Wind Kite Festival that takes place in Morecambe every year.

Some extra perks for me as an amateur musician myself were being able join the Baybeat Street Band in my own time, which gave me the opportunity to regularly rehearse again following the pandemic and even do a few gigs this summer. I also recorded some trumpet for the More Media Collective as part of their protest song created for the Demo Tapes project inspired by the North West sound Archives+. None of this would have been possible had I not done this internship!

More Music’s position as a community music education charity cannot be underestimated. The tangible effect it has on the people who attend its music sessions and events demonstrates the importance of continuing to support arts organisations, particularly at a time when the sector has been severely impacted by the pandemic. More Music was lucky enough to benefit from the government’s Cultural Recovery Fund, but the future of the arts still remains uncertain. It has never been more important to support your local community and the organisations who are there to support you.

More Music may be an individual organisation, but at its core, is the community. It achieves so much on its own for the benefit of so many others.

I will always have fond memories of my time at More Music and will certainly be back to visit in the future. All that leaves me to say is thank you for giving me such a wonderful experience and for letting me play a small part in this incredible organisation. May More Music’s success long continue! 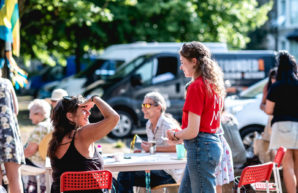