Streets in the Sky by Richard Davis

“On the opening night of my exhibition, Streets in the Sky, I’ll explain how I came to squat in the notorious district of Hulme in Manchester during the 1980’s and how I converted my living space into a Photographic Studio and Darkroom. What followed was an unforgettable intense period of creative freedom which led to a desire to document, via photography, my surroundings in the Brutalist inspired environment that was Hulme.

Along the way I also took a series of portraits in my flat of the many talented individuals that emerged from the arts scene which dominated in the City of Manchester during this time including Steve Coogan, Caroline Ahearne, Lemn Sissay, Henry Normal, Jon Ronson & John Thompson. 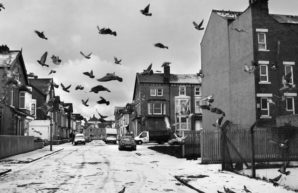 Exhibition runs until to 31 January 2022