Hot on the heels of her UK Americana Award nomination, showcasing at Folk Alliance International and International Live Music Conference  Lady Nade is soaring into Autumn with her Folk and Americana chart top third album release ‘Willing’.  With soothing words and melodies that nourish the mind and body though life’s complicated tapestry,  Weaving folk into Americana, her performances are like a reunion. Share a room with her, and she’ll give you her story. All of it. The joys and sorrows. You will love her for it, and she will love you back.

Lady Nade started writing poems and songs as a form of healing from grief, performing in venues across her native city of Bristol, her work developed into a calling to connect with her fans on a deeper level and help lead them through life’s complicated tapestry with the healing power of music. She pours creativity into every song, often lavishing them with a recipe to match.

Continuing to champion the positive connection between music, well-being and the importance of equality and diversity within the arts. A patron for Music Venue Trust Lady Nades album includes single releases ‘Ain’t One Thing’ and Willing’ which promote messages of acceptance Ain’t one thing promotes  all bodies regardless of physical ability, size, gender, race, or appearance and Willing promotes acceptance, celebration of who we are, and how we can support each other.

The album continues to be a huge success reaching the hearts of so many, gaining airplay on BBC Radio 2, Northern Ireland & BBC Radio Ulster , BBC Radio Scotland, BBC Wiltshire and Bristol as well as several online publications including; Folk Radio, Americana UK, Black Ballad UK and Holler.Despite the global pandemic the past 18 months has been  full of high-notes; performing at many online festivals in the UK and USA including Thriving Roots, Folk On Foot and Folk Alliance international as well as selected to be one of 12 artists to represent England at Global Music Match and hailed “A Global Match pandemic success story”. 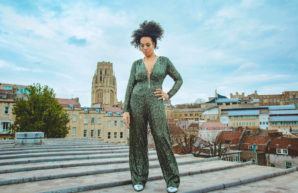