Hymns for Robots | Me Lost Me & Nathalie Stern

Hymns For Robots Electronic Music Session is back at More Music for a special show featuring two super fine Newcastle based producer/vocalists.

Me Lost Me is the solo electronic music project of Newcastle based artist, composer and musician Jayne Dent, current Artist in Residence at internationally renowned concert venue Sage Gateshead. Described by BBC Radio 6’s Tom Robinson as a “brilliant peculiar noise”, Me Lost Me delights in experimenting with genre, taking influence from folk, electronica, art pop, ambient and noise music to create a beguiling mix of soaring vocals, synth, field recordings and hypnotic rhythms. Her live shows are atmospheric, dark and playful, with a repertoire that explores storytelling through original songs, improvisations and reworkings of traditional ballads.

Of Swedish origin and now living in Newcastle upon Tyne, Nathalie Stern first served her apprenticeship in Swedish feminist pop punk band Candysuck, which influenced the emerging Swedish feminist music movement in the mid-90s, before moving to the UK and founding the guitar/drums duo Lake Me in 2001. As a solo act, and keen to explore traditional Swedish folk heritage and more experimental sounds, she released her debut album ‘Firetales’ in 2009 on her own label Minta Rec and on the German label The Company With The Golden Arm. 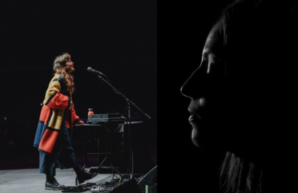 Me Lost Me - Worm Unearthed (Official Music Video)
Nathalie Stern • Interlude / Stig In Lucia • live in Newcastle 19/06/21
Me Lost Me, 'Nettle Soup' (Summer Studios at Sage Gateshead)
Sign up to our email newsletter